Based on a true story, these Characters are from Mushrooms – An Unlikely Charisma – a whimsical photo-essay & exhibit 2019, Beverleigh Barton LeVan-

Character descriptions are for the Illustrator – side-by-side will be L the actual mushroom inspiration, R will be the Illustrator’s transformation to mushroom-character: FunGus, self-deprecating Storyteller.  He’s fun-loving, warm, appealing and approachable.  FunGus’ shape is uneven, ragged, but soft and imperfect.  Everybody loves being around FunGus. Grande, the all-knowing, wise “God-“character lives perched high up in a Village tree.  Grande loves everybody including crotchety Mr. Famish, and knows exactly what to do, all the time, without sweatin’ it. 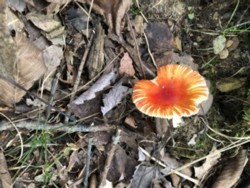 Stewart, the optimistic, bright and sunny leader of the “band,”is diminutive but industrious and a go-getter.  He has demure, big, sleepy, shy & enticing eyes, and an obvious chip out of his ear from a previous run-in with Mr. Famish. The Rolling Stones’Keith Richards meets kindly Rastafarian, sensitive old soul, Keith.  With some age and experience accumulated, worn proudly on his face, he’s mangled and been through the mill.  He represents mystery, depth, introversion, peace, solitude, and acceptance with not an ounce of hatred, bias, or discord.  Exceptionally likeable, his face is the burgundy-pocked, chewed up, raggedy mushroom – he should have dark eyeliner around his eyes, and his head is the black squid mushroom with obvious long dread-locks atop a dirty white stem/body. Miss Pinky Pepper, the girly-girl with an attitude.  She’s touch, narcissistic and trying to overcome her image as soft and girlie even though she dons undeniably long, soft, sweet, and pretty pink and white billowy, cotton-candy curls; she could give or take all of this litter cleanup trying to talk the mushrooms out of picking up the stuff, but in the end, can’t resist Stewart’s doe-eyes. Chunk-a-lunk is the Village bouncer, no-nonsense administrator, and “heavy-weight,” regular Joe mushroom.  He holds round-table meetings to organize litter clean-up events, and acts as safety officer during those events, to keep the mushrooms safe from outside forces beyond the woods.  He’s smart and organized; maybe he should wear glasses to illustrate his intellect and seriousness. Camee (French pronunciation of Camille) is our morel or sponge, transformer, or chameleon character, who changes colors (see Mushrooms: An Unlikely Charisma 2019, for all the many and varied colors of the mushrooms I have photographed) with every emotion perceived in the Village.  She’s Keith’s female kindred spirit, sweet, gentle, peaceable and kind. Lady Moss, is the benevolent Woodland Village Landowner who is responsible for launching their annual Litter Cleanup Campaign fete.  She’s a cartoon-woman of a certain age, the Village’s attractive, contemporary fairy godmother who hibernates all winter, and who exudes elegance and grace; her movements and body are ballet-like, with pristine bare feet and always dressed in a moss green, designer outfit whether it’s a dress, hiking/fishing vest with litter-cleanup tools attached, or long pants and turtleneck.  She’s kind, warm, inviting, soft, wise, witty, nurturing, and a stately queen/leader of the mushrooms. Lady Moss triggers the opening day Litter Cleanup celebration (May Day) explosion from the cluster of mushroom spores shown, which bursts into the air with dandelion fluff and white lights, eliciting cheers from all the Village, except neighbor Mr. Famish, who snarls instead.